This the spring of 2015, France’s government voted to ban large grocery retailers from destroying food they deemed unfit to sell in their stores. Instead, these stores are encouraged to donate to charity, or to farms to use as animal feed and/or compost. Items that would be donated are still considered safe to eat but are either packaged wrong, slightly damaged, or past their best before date. France has 20-30 kg of food per person, per year, that is wasted. This amounts to about $27 billion dollars in total. Their government is taking action and wants to cut waste by 50% by 2025. The government’s comprehensive strategy also targets school cafeteria waste and aims to teach students about reducing waste at home. In comparison, Canadians waste about $31 billion dollars in total, of which, about 10% of that comes from grocery stores. All together the world wastes about one-third of the food grown every single year. 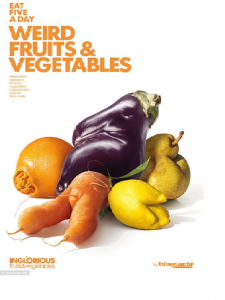 Inglorious Fruits and Vegetables was started by a French supermarket, Intermarche, in order to sell fruits and vegetables that are still edible, but do not meet the store’s aesthetic standards. These items are offered at a discounted price and have their own aisle. Since starting this initiative, the supermarket has seen an increase in customers to their store. Additionally, this discounted rate also makes fruits and vegetables more affordable to lower income families, who are the most likely to cut their food budget during financial hardships.

To see a video of the campaign: Inglorious Fruits and Vegetables video

In Canada, Real Canadian superstore and No Frills, have recently announced that they are trying to cut waste by selling imperfect vegetables under a line called Naturally Imperfect at a 30% discounted rate. So grocery stores are now beginning to tackle the 10% of food wasted at their stores but what else can be done?

What Can You Do?

The majority of food waste occurs at the household level, which accounts for 47% of the food wasted in a given year. This includes leftovers, vegetable and fruit trimmings, expired or close to expired produce, and items forgotten in the freezer that end up getting freezer burned. So what can you do to decrease the amount of food you throw away and save money?

Here are some strategies you can use to decrease the amount of food you throw away:

Food waste is becoming a prevalent problem with an increase in food insecurity. By cutting down the amount of food we throw away not only are we saving money, we are helping the environment and supporting our community. There are many things that can be done at the community and individual level.

What is something you do to cut food waste at home?